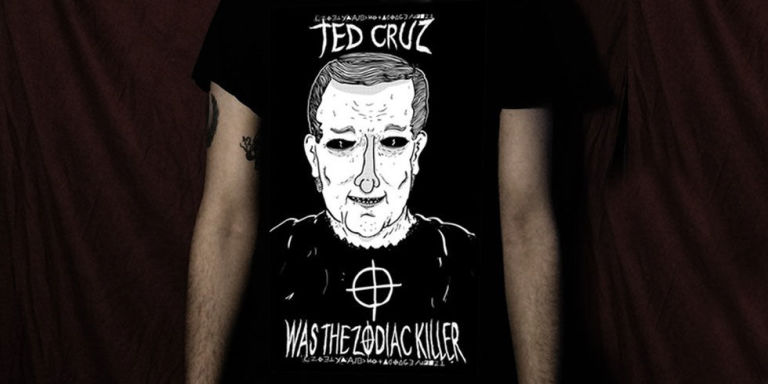 Tim Faust and Rory Blank, who created the shirts, do not actually believe that Cruz was the Northern Californian serial killer, they just wanted to show people that this presidential candidate is pretty damn scary.

Some Texans are capitalizing on a trending meme that accuses Cruz of being the infamous Zodiac Killer from the 1960s and 1970s, by selling “Ted Cruz Was the Zodiac Killer” T-shirts online and donating the profits to an organization that funds abortions.

Tim Faust and Rory Blank, who created the shirts, do not actually believe that Cruz was the Northern Californian serial killer, they just wanted to show people that this presidential candidate is pretty damn scary.

“There’s no way Ted Cruz is the Zodiac killer — the dates don’t match up. However, there’s no way of knowing whether Ted Cruz has sworn with his every waking breath to further the agenda of the Zodiac Killer, whom he may or may not love.”

Faust said the profits will go the West Fund, a nonprofit that helps women pay for their abortions in El Paso, Texas, which is one of the poorest cities in America.

“We launched the shirt campaign because the Rio Grande Valley is an abortion wasteland … and this was really bringin’ us down,” Faust told Cosmopolitan in an email.” Faust says he has since raised $6,500 for the organization.

According to Cosmo, the lack of options for women seeking to terminate a pregnancy is “a vision of the future” if the law is upheld in the Court, he explained, “and the cruelest penalties are levied upon those who can afford them least.”

The man that science has proven to have “a punchable face” has yet to comment on the popular meme. While Cruz is currently not faring well in the Republican primary, it is almost certain the Texas senator has a host of more pressing issues to deal with.