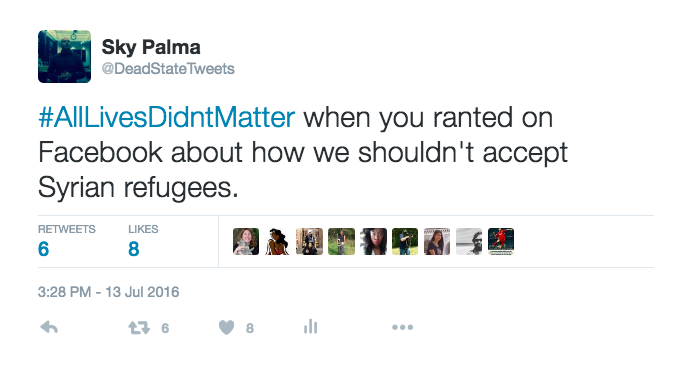 Social media, when utilized by people who have an IQ at least above room temperature, has a way of pointing out the irony in this form of counter-sloganeering.

“All lives matter” may seem like a universal message in the spirit of unity, but anyone who follows current events and social media knows that it’s a narrative that’s been utilized to counter what is now one of the most recognizable civil rights protest movements in history.

Understanding the proper context is important, and that life skill becomes even more useful when it’s applied with a little empathy. But when context is hijacked by politics and ideology, it can become a powerful tool to change the subject and attack. “All lives matter” is not a call for unity – it’s a weapon designed to erase the African American experience regarding injustice at the hands of corrupt and poorly-trained cops.

That’s not to say all people who use the slogan are consciously pitting themselves against the cry of “Black Lives Matter,” but for some it’s an intellectually lazy way to avoid the hard questions about race relations in modern times.

We can debate the tactics of some in the BLM movement; it’s not a monolithic phenomenon with a core of shot callers disseminating strategy to its foot soldiers. But listening while acknowledging the very real problem of police abuse and racial profiling is the key to unity, not diversion.

Social media, when utilized by people who have an IQ at least above room temperature, has a way of pointing out the irony in this form of counter-sloganeering. The trending Twitter hashtag #AllLivesDidntMatter does exactly that:

#AllLivesDidntMatter when #PhilandoCastile was shot and killed for being a law abiding gun owner and alerting the Police about it.

#AllLivesDidntMatter when GOP voted to repeal the ACA 60 times.

#AllLivesDidntMatter when the police were protecting the KKK March because it's "freedom of speech" but arrest peaceful BLM protestors.

#AllLivesDidntMatter When all your founding fathers (whom you proudly celebrate) had this to say about black lives. pic.twitter.com/56quwCl6MB

#AllLivesDidntMatter when Arizona made it legal through SB 1070 to terrorize and profile people who "looked" undocumented.

People are taking down Black Lives Matter haters with #AllLivesDidntMatter – and it’s 🔥.https://t.co/mPw8zzC0u7