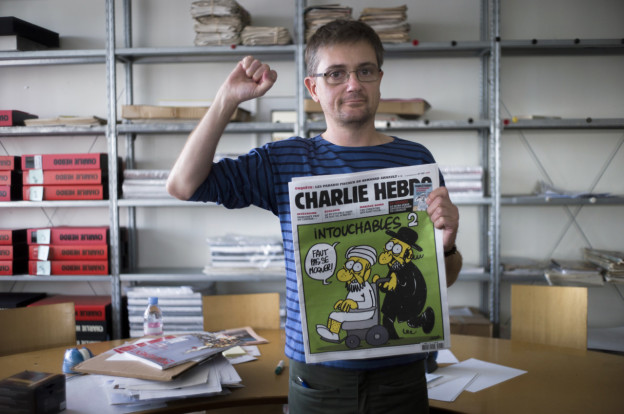 According to the newspaper’s editor back in 2011, Charlie Hebdo has been sued 13 times by Catholic organizations, but only once by a Muslim one.

Before the massacre yesterday morning at its Paris headquarters, Charlie Hebdo was long on the radar of Muslim extremists for their cartoons of the prophet Muhammed and other Islamic figureheads. That much was evident when in 2011, their office was firebombed after running a cartoon depicting Muhammed as a guest-editor of the paper.

But it’s important to understand that the satirical rag didn’t solely challenge taboos within Islam; its character was anti-religion and anti-establishment in general. According to artist Bernard Velhac, who was killed in the attack on Wednesday, the paper’s “right to blasphemy” only caused widespread controversy when they focused on Islam.

“We publish caricatures every week, but people only describe them as declarations of war when it’s about the person of the Prophet or radical Islam,” cartoonist Stéphane Charbonnier, known as “Charb,” told Der Spiegel in 2012. He too was killed in the shootings.

According to the newspaper’s editor back in 2011 (around the time of the Muhammed as guest-editor piece), Charlie Hebdo has been sued 13 times by Catholic organizations, but only once by a Muslim one.

Below are some of the covers targeting Christian icons and church leaders from over the years: