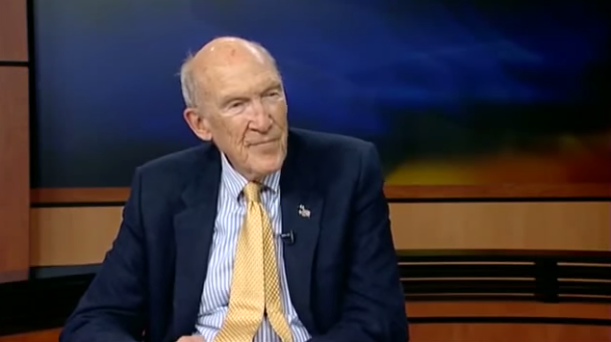 Alan Simpson said Sunday that conservatives need to shut up about social issues and raise the minimum wage.

Alan Simpson, a former Republican US. Senator, told KULR Sunday that conservatives need to get with the times by shutting up about social issues and raising the minimum wage.

Simpson said that after many visits to college campuses over the years, he has discovered that young Republicans don’t care about things like gay marriage and abortion; they care about the economy and they would like their representatives to focus on the almighty dollar rather than the Almighty.

He then accused his fellow conservatives of being hypocritical when it came to morality and Christian values.

“It’s the guy who’s checking your moral values, like to ask for Jesus, you know — while they’re diddling their secretary,” Simpson said.

Unlike most of his fellow Republicans, Mr. Simpson has always been pro-choice. He said that he does not believe male representative should be able to vote on reproductive issues.

Simpson, who is the co-chair of President Obama’s National Commission on Fiscal Responsibility and Reform, called for a raise of the minimum wage to $15.00 an hour.

Sounding more like Bernie Sanders than the former representative of one of America’s most conservative states, Simpson said that people in lower income brackets are bound to become frustrated when businesses say that they can’t afford a wage increase to $15.00 an hour, and yet publish reports saying they have made upwards of a billion dollars.

Simpson added that young people today are being encouraged to consume rather than save, going on to say that there is no such thing as job security anymore and most people don’t have savings accounts.

In spite of their demonstrated lack of ability to save money, Mr. Simpson said today’s college student’s work harder than he did.