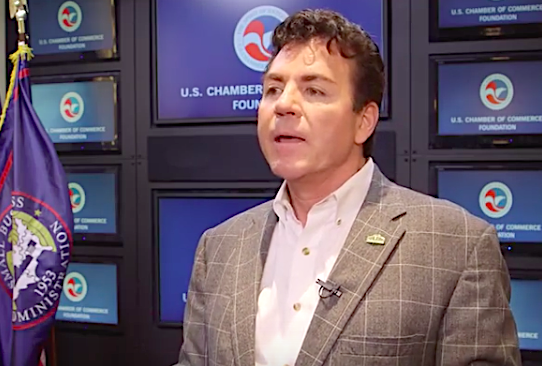 Papa John’s CEO John Schnatter is stepping down after his remarkably dumb comments about the NFL protests drew backlash.

Papa John’s CEO John Schnatter is stepping down, according to an announcement from the pizza chain this Thursday. The decision comes after white supremacists praised his criticism of the NFL protests and threw their support behind his brand.

A press release disseminated by the company says Steve Ritchie will be taking his place. As The Hill points out, Ritchie, formerly the company’s chief operating officer, was originally a customer service rep for the company before rising through the ranks and becoming a franchisee in 2006.

“I am so proud of Steve — he has excelled at every job he’s ever held at Papa John’s — from being an hourly customer service rep, to a delivery driver, store general manager, director of operations, franchisee and most recently President,” Schnatter said in the press release.

“With 120,000 Papa John’s corporate and franchise employees, Steve will put the spotlight on our pizza and the most important ingredient — our team members,” he continued. “We couldn’t have a more proven leader to guide Papa John’s through its next stage of growth.”

Schnatter will stay on the company’s board as chairman and founder, but will have a diminished role in the company. No reason was given for his resignation.

Schnatter made headlines back in November when he saw his net worth fall $70 million in “less than 24-hours” after the company released its third-quarter financial. During a conference call, Schnatter placed part of the blame on the NFL, which has in the midst of  strife over the National Anthem protest movements that swept through its ranks.

“The NFL has hurt us by not resolving the current debacle,” he reportedly said in the conference call. “Leadership starts at the top, and this is an example of poor leadership,” he continued, adding that the “controversy is polarizing the customer, polarizing the country.”

Schnatter’s stance drew praise from white nationalists all over social media and chat forums, which prompted a company spokesperson to issue an apology on Twitter.

“Papa John: Official pizza of the alt-right?” read a post on the white supremacist website The Daily Stormer. The post featured a Papa John’s pizza adorned with swastika-shaped pepperoni slices. “This is great,” the post read, referring to his comments about the NFL.

“The statements made on our earnings call were describing the factors that impact our business and we sincerely apologize to anyone that thought they were divisive,” the statement read. “That definitely was not our intention.”

“We condemn racism in all forms and any and all hate groups that support it,” the statement continued. “We do not want these individuals or groups to buy our pizza,” added Peter Collins, the company’s senior director of public relations.”