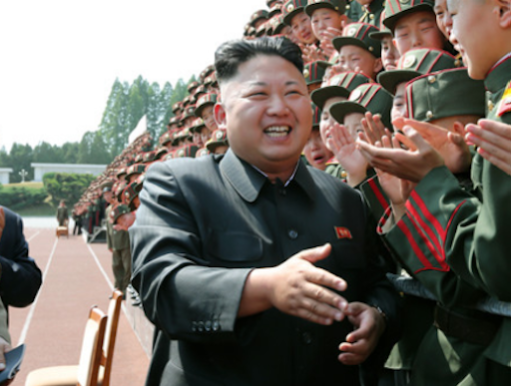 According to North Korean state media, Kim Jong Un has decided not to order a missile strike on the U.S. territory of Guam because watching the…

According to North Korean state media, Kim Jong Un has decided not to order a missile strike on the U.S. territory of Guam because watching the “foolish and stupid conduct” of the U.S. is more entertaining, NPR reports.

During a visit to the Korean People’s Army, Kim walked back the plan and said that he’d “watch a little more the foolish and stupid conduct of the Yankees,” but added that the U.S. shouldn’t get too comfortable.

A self-imposed deadline for a missile test set for mid-August now seems to have been scrapped as well, easing tensions that flared after President Trump warned the hermit kingdom that it would face “fire and fury” if they carried on with their provocative exercises. “Military solutions are now fully in place, locked and loaded, should North Korea act unwisely,” Trump also said last week.

“I think that’s the first time [North Korea] heard it like they heard it,” Trump said. “And frankly, the people that were questioning that statement, ‘was it too tough,’ ‘maybe it wasn’t tough enough’ — they’ve been doing this to our country for a long time. For many years. And it’s about time someone stuck up for the people of this country.”

In a statement this Tuesday, South Korea’s president Moon Jae-in reminded the word that without “the consent of the Republic of Korea [South Korea], no country can determine to take military action.”

Although the rhetoric has calmed down, Guam is still on high alert.

“There is no change in the threat level,” Guam Homeland Security adviser George Charfauros said according to NPR. “We are very … I’d say almost ecstatic that Kim Jong Un has backed off.”